Raven Pirate Assassin by Landra Graf. A Beyond Fairytales Novel 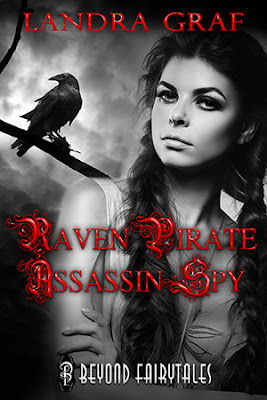 Sorella Corvino lost her brother to The Cursed years ago. Sorella is so determined to find him, she'll make any deal, rescue the outcasts and those like him, and risk flying into any port to rescue him. When her latest pirate efforts partner her with a bounty hunter who's too charming, sexy, and handsome for his own good, she knows she's in trouble.

Disowned and a marked criminal in the United States, this merchant turned bounty hunter, is one bounty away from freedom; and freedom's price is handing over one person to the most cutthroat gang in the world, The Cursed. Yet, he can't get to them without Sorella's help. Too bad she's gorgeous, aggravating, and a little trigger happy.

As the attraction mounts, the danger grows and the pair find themselves invading a skin trader den, the ballrooms of dictator-ruled Germany, and fighting battles in the sky in the hopes of getting everything they want. Only thing they didn't plan on... falling in love.

“I already paid off the police, at least for the moment. Until your cousin offers them more.” The words rolled off her tongue matter-of-factly as if this sort of situation occurred every day. His pants tightened at her words. A woman who feared nothing, who didn’t believe in danger.

“Very generous of you.”

“Hmm?” She stopped playing with her balisong knife and looked at him.

He came toward her, arms open, expecting her to move away from the door and put distance between them. She didn’t. “You protected me at your own expense.”

“I thought you might take my generosity as replacement for me losing the bet.”

Less than six inches separated their bodies. The pulse point at her neck fluttered, her breath shallow. Her knife stilled in her hand, closed, but ready to deploy. She waited for him to make a move.

The distinct possibility existed he’d be dead in the next minute, but her lips were deep red, like cherries he’d eaten in late summer. To leave them untouched would be a crime. “You thought wrong.”

He leaned in. She gasped, and then he kissed her.

She’d been kissed before, but it had merely been her parents’ chaste touches to her cheeks or forehead, and, once, her fiancé had brushed her lips with his. Otherwise, she had remained untouched until now. As he touched the tip of his tongue to her closed mouth, a sinful sensation swamped her body. Gooseflesh broke out underneath her clothes, and little hairs stood up on the back of her neck.

Sorella grabbed the lapels of his coat and opened her mouth. Something carnal took over, an instinct to engage his tongue in some primitive dance. If this was considered uncivilized, she’d gladly abandon society and all its norms.

As fast as the moment began, it ended, and Ian pulled back a few inches. “You taste amazing.”

He did, too; like peppermint, and…. “You taste familiar.”

Not as if she’d tasted him before, but somehow the aromatic tang of his mouth and the scent of his breath on an exhale resonated within her. She’d bottle it if she knew how.

“As my captain commands.”

Landra Graf consumes at least one book a day, and has always been a sucker for stories where true love conquers all. She believes in the power of the written word, and the joy such words can bring. In between spending time with her family and having book adventures, she writes romance with the goal of giving everyone, fictional or not, their own happily ever after. 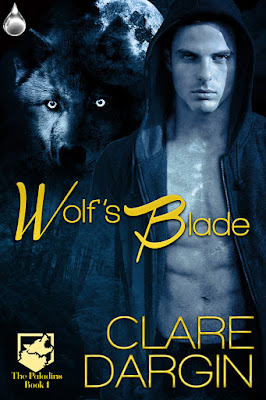 Blurb:  Samantha Dixon rescues a wounded wolf shifter in the woods near her home … and unwittingly gets drawn into a dangerous game of cat and mouse with a murderer. Callum Blake is on the trail of an evil man who would be king of all wolf kind, no matter the cost … it’s up to Callum to stop him.

How can Callum fulfill his duty to protect his pack and save the woman who is destined to be his mate?

Embrace This Blog On Bloglovin'

A Sample of What I Am Tweeting

Like What You See? Have It Delivered To You Automatically.